Postcards from the Edge – Broker Report From April Lloyds Trip

MyBrokers Ireland Trip to Lloyds 19th April 2018.  The account below was kindly written by Marie Cronin from McMahon Galvin who attended the London event with MyBrokers Ireland.

Thursday 19th July should have been a normal working day for me but instead my Employers offered me the opportunity to go on the Broker’s Ireland Lloyd’s of London trip. I must admit, I nearly said no to the opportunity as I was nervous about going on the trip on my own. Looking back on that day now I am so glad I decided the opportunity was too good to turn down as everybody I met on the trip that day was so friendly and I didn’t once feel uncomfortable. In fact I had the most enjoyable, interesting and fascinating day mingling with other likeminded professionals and getting a sneak peak of what goes on behind the scenes at Lloyds!

With my alarm set for 3.15am that morning it was an early start and I woke feeling a mixture of nervousness and excitement for the day ahead. I set off for the airport at 4.15am and met the lovely Hazel and Amy from Brokers Ireland and the lovely Ciara Kennedy from Michael Kennedy Insurance Group at the Departure Gate and my nerves soon vanished after I introduced myself and we began chatting away effortlessly. Once on the plane I began taking photos out the window and unbeknown to myself at the time, completely ignored Eamonn Egan as he said hello to me from the seat behind (Sorry again Eammonn! I was in a world of my own and didn’t realise who you were at the time) Eamonn introduced himself when we got off the plane and joked about how I had earlier ignored him on the plane! We took the DLR to drop of the girls bags at their hotel and there we bumped into the lovely Susan Naughton and her husband Tommy and we all went for breakfast together to fill our bellies before the tour started. The heat that day was pretty intense and I later read on my way home that it had been the hottest April day in London in almost 70 years!

We made our way over to the Lloyds Building at about 10am to collect our Visitors passes and met with the rest of the Brokers that would be joining us for the day. We were then met by Eamonn Egan and Philip McCarthy who escorted us to one of the Presentation rooms. I remember walking into the room and being amazed at the view of London City and I stood at the window soaking it all in for a couple of moments before introducing myself to people as they came in.  We were met in the presentation room by Keith Stern who started the presentation off with a little fun quiz to see how much we already knew about Lloyd’s. He then spent roughly 45 minutes telling us all about Lloyds. I was fascinated! I think it is amazing that Lloyd’s began as a coffee house in 1688 known for providing marine insurance and grew from there to what it is today and the thing I love most is the fact that you can feel the history within the building, they have conserved so many elements from years ago that are scattered throughout the building.

While Lloyd’s began with Marine insurance back in 1688, it now concentrates on specialist insurance. Cover can be obtained for livestock, celebrity body parts and even space! Marine Insurance is still a big part of Lloyd’s, taking up 8% of its business, Reinsurance takes up most of Lloyds Business at 31% followed by Property at 27%, Casualty at 25%, Energy at 4%, Motor at 3% and Aviation at 2% and while 2% does not seem like a big figure, if Lloyd’s was to stop insuring aviation, within 24 hours flights across the world would be cancelled! How amazing is that?! After Keith’s presentation we were taken on a tour.

As we stepped outside of the presentation room I looked through the glass window looking down on the Underwriting Room which we were told is often referred to as ‘The Room’. It was like something out of a movie, all the hustle and bustle I felt like I was in the middle of a movie set and I was amazed. First we were taken to see the Adam Room which was basically a recreated 18th Century Dining Room with a long dining table so shiny you could see your reflection in it with the biggest sparkliest chandeliers I ever seen hanging above it. I found it fascinating that this room was transported piece by piece from the previous Lloyd’s Building and placed on the 11th floor of the new one.

Next we were brought to the ground floor were we were shown the Lutine Bell which we were told was traditionally rung for important announcements, one ring for bad news and two for good! The bell would ring if there was news of a major loss so that everyone with an interest in the particular risk would be aware of the news. The Titanic was insured at Lloyds and when she sank, confirmation reached Underwriters by the sound of the Lutine bell! The bell no longer rings for these reasons but instead is rung for special occasions like important visitors such as the Queen (I still don’t understand why they didn’t ring the bell to announce my arrival! 🙂 )

Next to the Lutine Bell was the Loss Book which quite amazingly is still used today to keep records of commercial ships lost at sea. When the Titanic was confirmed as a total loss she was entered into the Loss Book and it is amazing to think that this same form of recording is used to this very day. They still even use a quill pen to log every Lloyds insured ship that sinks!

We were brought briefly around the Underwriting floors and got to see exactly what goes on behind the scenes. We could see first-hand the brokers ascending and descending the many escalators to obtain Underwriters signatures for their slips. It was such a surreal experience.

After our tour we all went for lunch together in the Lloyds canteen where there was every kind of food and drink to choose from. It was great to sit with so many likeminded people chatting about the morning we had, what we had seen and learned and to sit back and soak it all in.

After lunch we went back to the Presentation room where we were introduced to Matt Carlick from Citynet. Matt gave us an insight from a Brokers point of view and the thing I loved most about his presentation was the fact that he oozed enthusiasm, passion and pride in both the insurance market and Lloyds itself. His presentation was my favourite of the day.

Matt’s presentation was followed by a brief talk on Brexit from Vicky Block who provided us with information on where we currently stand with regards to Brexit and she advised us of the processes and background leading to where we are at the moment. Vicky’s talk on Brexit was followed by a formal close by Eamonn Egan who provided us with the opportunity to ask any questions we may have.

After an amazing day in the Lloyds Building we were then brought to the Gherkin, Yes ‘The Gherkin’ where Robertson Low very kindly hosted a drinks reception. I met Nicola and Mark Whelan and was not surprised at all when Mark told me my Boss had phoned him that morning to ensure I was looked after! It was so nice to relax with an ice cold beer looking out at the amazing views of London City and chatting with all of the lovely people I met that day. Most people went on to the Revolution Bar after we had a quick tour of the Nexus offices but I said my goodbyes and made my way back to the Airport as I had work the next morning.

All in all I had an amazing day and I was so glad that I decided to ignore my fears of going on the trip alone as it was such an amazing experience and it would have been a shame to let fear stop me from going. Lloyds of London is the largest marketplace for international insurance and there is no other like it in the World. I came away from the trip with a better understanding of its history and its functions. The thing I loved most about Lloyds was the fact that they have kept the face to face element of the industry something that is largely a thing of the past these days. Technology improves by the day and it helps us transact business in a fast and efficient manner but I believe that this industry needs to keep the face to face element as a computer can never replace broker to underwriter negotiation and I think that we need to strive to be more like that. A computer can be programmed for a multitude of things but you cannot beat the knowledge experienced brokers and underwriters hold and the passion that they have for what they do.

I would like to end this by thanking my Employer for providing me with the opportunity to go on this trip and to thank Hazel and Amy for taking me under their wing that day. I would also like to thank all of the lovely people I met that day, the speakers and to everyone involved in making the day such a great experience. For anyone who wanted to go on the trip this year but who didn’t go for whatever reason, I would highly recommend you go next year, I can promise you will have an amazing day and will not regret it! 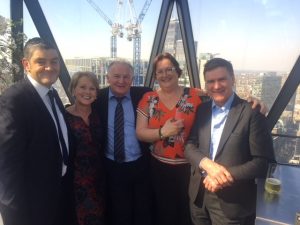 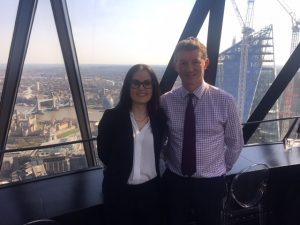 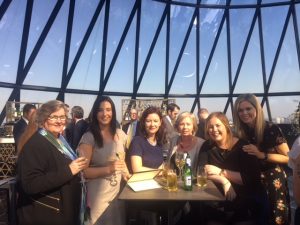